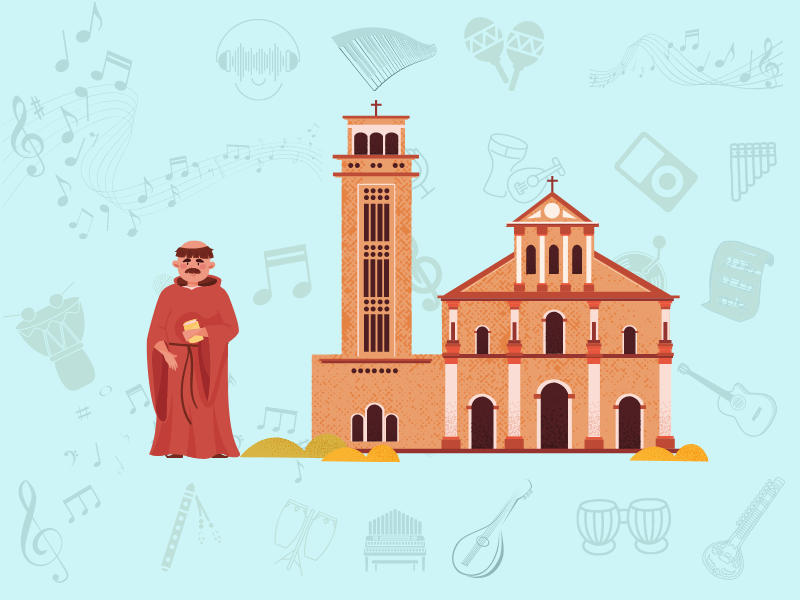 In this article I’m going to teach you how to write a parallel organum.

As the title clearly suggests, we’re going to be dealing with a specific type of organum, called parallel organum, which represents the earliest form of improvised polyphonic singing created in the Western world.

By reading this guide you’re going to learn what is a parallel organum, the difference between vox principalis and vox organalis and the strict rules that governed the combination of the two as per Musica Enchiriadis (9th century), the first and most reliable treatise on early sacred polyphony.

The historical and socio-cultural aspects of organum in its broader sense won’t be covered in this blog post since they will be discussed in detail in a future article.

What is a parallel organum?

Before giving you a formal definition, I want you to look carefully at the score below: 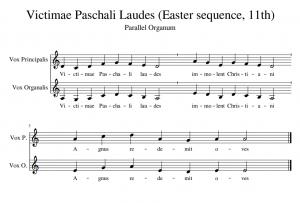 As you may have noticed, a parallel organum is a polyphonic vocal piece made up of two melodic lines, called vox principalis and vox organalis.

Both melodies are applied to the same text, written in latin, and use the same rhythmic values.

So what’s the difference between the two, if any?

The vox principalis is considered to be the main voice, since it contains a preexisting Gregorian chant and is placed above the vox organalis.

The vox organalis, which is positioned below the principalis, serves the task of embellishing the preexisting Gregorian chant by presenting a new and lower melody.

But how do we create this new melodic line?

The rules governing a parallel organum are very strict in this sense:

composers are not allowed to freely choose the notes of the vox organalis but have to derive them mathematically from the vox principalis.

Fine, but what are these mathematical rules?

When it comes to composing the vox organalis of a parallel organum you have a choice:

following the melodic profile of the vox principalis a perfect fourth or a perfect fifth below.

Let’s explore both of these techniques.

Technique of the “Perfect Fourth Below”

Following the instructions contained in Musica Enchiriadis, the first way to write the vox organalis is transforming each note of the vox principalis by lowering it down of a perfect fourth.

What do we mean by perfect fourth?

A perfect fourth is a type of interval, a concept established by music theorists to indicate the distance between two notes.

Here you can see other examples of perfect fourths:

Each of these intervals is equal to 2 tones and 1 semitone.

Have you noticed, though, that the fourth interval presents a B flat and not a normal B?

This happens because the interval F – B is not an example of perfect fourth but it is an augmented fourth:

Augmented fourths were constantly avoided by those monks that were used to compose parallel organa.

Why was this particular type of fourth discarded?

Because its inner sonority was believed to evoke the devil.

That’s why this interval was commonly referred to with the expression “diabulus in musica” (devil in music).

So, whenever you’re going to combine the note B with the note F during the writing of a parallel organum, bear this in mind:

Here’s an example of a parallel organum composed with the technique of a perfect fourth below:

Click here to listen how the two voices sound together.

Technique of the “Perfect Fifth Below”

Another technique applied by medieval monks to compose a parallel organum was to derive the vox organalis from the principalis using intervals of perfect fifth instead of perfect fourth.

A perfect fifth is an interval made of 3 tones and 1 semitone.

Given a note, for example C, how can you derive the corresponding perfect fifth?

The logic is identical to that employed to generate an interval of perfect fourth:

choose a note, count the note itself as one and then move backward four times.

In these examples you can see how the calculation process works:

Other examples of perfect fifths are represented in the score below:

Here’s an example of a parallel organum composed with the technique of a perfect fifth below: 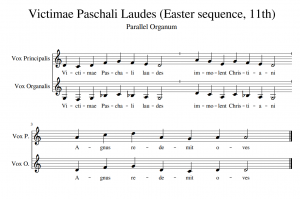 As you can see, the vox principalis is identical because corresponds to the main Gregorian chant; it is the vox organalis that has undergone a substantial change not in the rhythm but in the notes.

Click here to listen how the two voices sound together and try to catch the harmonic difference between this version and the previous:

The composition process: here’s how it works

If you want to compose a parallel organum the first thing you need to do is identifying a preexisting Gregorian melody to use as vox principalis.

There are lots of free resources online that will allow you to find plain chants.

The Gregorian Institute of America has uploaded on its website “Chants of the Church”, a pdf that contains a selection of Gregorian chants written in modern notation.

Use this source to pick a melody.

Once you have chosen the Gregorian chant that you like the most, use it as the upper voice: the vox principalis.

Now it’s time to decide what kind of parallel motion you want the two voices to follow: in perfect fourths or in perfect fifths?

Let’s suppose you have chosen to use intervals of perfect fourth.

Then you can start deriving the notes of the vox organalis.

Take each note of the vox principalis, move it down of a perfect fourth, maintain its rhythmic value and write the note in the lower score.

As you move forward with the transposition, you realize the two melodic lines are intimately connected one with the other, since the vox organalis reproduces exactly the melodic shape of the vox principalis:

Pay attention: whenever you deal with the interval F – B, remember to flatten the note B or sharp the note F depending on the specific situation.

Repeat the process for all the notes of the vox principalis.

You have written your first parallel organum.

Technique of “starting and ending with unison”

You have just learnt 2 ways to create a parallel organum:

Musica Enchiriadis suggests us other possibilities for combining the two melodies, as explained by Richard Holladay in his PhD dissertation.

In fact, it was perfectly fine for the monks to start singing in unison until the moment in which the movement of the upper voice (vox principalis) created an interval of a perfect fourth with the lower voice (vox organalis).

At that point, the two melodic lines could proceed in parallel motion.

The end of the verse was marked by the two voices progressively abandoning the parallel motion and reaching unison again.

Take a look at the score below and listen to the corresponding audio file:

According to Musica Enchiriadis, the monks performing a parallel organum were also allowed to double the two voices at the octave above or below.

Use this strategy if you want to add more thickness to the harmony of your composition.

The best way to deepen the composition techniques used by the monks to create parallel organa is reading Musica Enchiriadis and Scolica Enchiriadis (9th century).

These two treatises were translated in English in 1995 by Raymond Ericson.

If you are interested in knowing more about the medieval notation used to write and sing the gregorian chants, you can start by reading “Basic Gregorian Chant and Sight Reading” a Pdf available for free at Musicasacra.com. 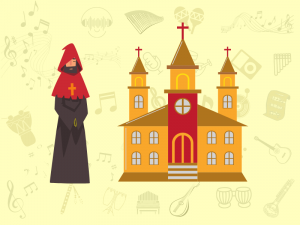 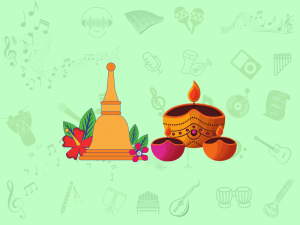