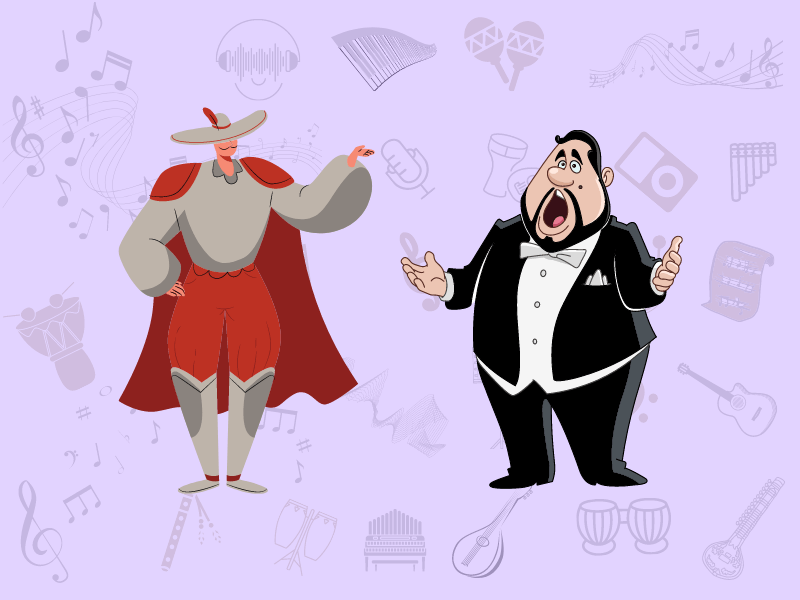 Florentine Camerata or Camerata de ‘Bardi refers to a cenacle of musicians, poets, intellectuals and playwrights who, towards the end of the 16th century, gathered together to address topics related to music, arts, science and literature.

It was also called Camerata de ‘Bardi because the meetings of this group of experts and artists took place right at the palace of Count Giovanni Bardi del Vernio, in Florence.

Furthermore, the first written reference to the name of the “club” is found in the score for “Euridice” by Giulio Caccini, who dedicates the work to Bardi, in memory of the group’s “beautiful years”.

The Florentine Camerata was therefore started by Giovanni Bardi in 1573, the date on which the first meeting between these intellectuals, musicians and poets took place.

In addition to Bardi, the Camerata also included Vincenzo Galilei (music theorist and father of the astronomer Galileo Galilei), Pietro Strozzi, Giulio Caccini and, most likely, also Iacopo Peri, Iacopo Corsi and Ottavio Rinuccini, to whom we owe the first librettos for melodramas.

Girolamo Mei, a Florentine historian and scholar who passed on many of his discoveries to Vincenzo Galilei and who acted as mentor of the group, actively participated in the life of the Camerata.

So, in a nutshell, this circle had the merit of gathering the most prominent men of Florence.

But what were the goals of the Florentine Camerata and how did it exert its influence on the birth of Opera?

What kind of musical topics and theatrical innovations were actually discussed by these intellectuals?

In this article you’ll find an answer to these questions and you’ll also discover the importance of the Camerata for the invention of monody and recitar cantando as a response to the hegemony of polyphony.

What was the purpose of the Florentine Camerata?

The main goal of the Florentine Camerata was to bring back to life a past model, namely, the Greek tragedy and its peculiar way of uttering the words.

Girolamo Mei, as both a scholar of ancient Greece and an acclaimed translator of the most important treatises on Greek music theory, made an important contribution to the research work carried out by the group of intellectuals.

In fact, he argued that the drama of the ancient Greeks was mainly sung rather than spoken.

This need of the Camerata to revive the Greek tragedy stems from the belief that the music of the time had become corrupt and, therefore, could be improved by adopting the Greek dramatic style.

However, it was easier to restore the “Greek style” in painting and sculpture than in music, as there were several works of art from which humanists could draw inspiration.

Not being in possession of “scores” of Greek music and not having a clear Greek musical model to be inspired by, the only way to go back to the musical style adopted in Greek tragedies was through the references to music present in Hellenic literature.

Among the writings that proved to be of fundamental importance in this reconstruction process, we certainly find that of the Greek thinker Aristoxenus, who suggested that the spoken word should have been the model for singing.

The members of the Camerata de’ Bardi were fascinated by this concept of vocal music, since it aimed to establish a harmonious coexistence between text and melody.

Perfecting music would also have improved society, as they argued that the art of sounds developed by the ancient Greeks was able to shake up the soul, clean it from all the impurities and guide citizens towards the realm of rationality.

The musical experiments carried out by the Florentine Camerata, as we will discover better in the course of this article, determined the birth of the “accompanied monody” (monodia accompagnata) and the development of a new singing style, called “recitar cantando”.

The “accompanied monody” was totally opposed to the concept of polyphony which we will now explore in detail.

The discussions of the Camerata were, therefore, centered on the relationship between word and music in the Greek world and in contemporary music production.

Vincenzo Galilei, key figure of the Camerata de ‘Bardi, wrote an important treatise “Dialogue of Ancient and Modern Music“, published in 1581, which was often discussed by the group of intellectuals.

This Dialogue contained some examples of Greek hymns and was also intended to be an attack on what he called “Ancient Music”.

When he speaks of Ancient Music he refers to polyphony, a term that derives from the Greek and means “many voices”.

Polyphony, in fact, is a compositional style that combines several independent vocal and / or instrumental sounds.

These voices differ from each other both from a melodic and rhythmic point of view, although they are linked by particular harmonic laws.

This was the typical practice of the Italian madrigal style which was going out of fashion in the 17th century.

The intellectuals of the Florentine Camerata criticized this polyphonic concept of music, as the overlapping of independent vocal parts did not allow the understanding of the sung text.

In this regard, Bardi, in 1578, wrote the “Discourse to Caccini on Ancient Music“, in which he also highlights the importance of the intelligibility of the text and proposes the abandonment of counterpoint.

To give you an idea of how this interweaving of voices makes the lyrics sometimes difficult to understand, I suggest you listen to Luca Marenzio’s Madrigal titled “Alone and pensive”:

This beautiful madrigal brings out, even more clearly, the two main criticisms that the members of the Camerata moved to the polyphonic vocal music of the time.

The first criticism is the one we have already fully explained, namely, the difficulty of understanding the sung text, whose words are often “obscured” by the constant interaction of the vocal parts; the second concerns the frequent repetition of parts of the text.

According to the Florentine Camerata, this polyphonic structure represented a huge problem from the theatrical point of view, as the continuous repetition of a verse by an actor did not allow the story to develop smoothly and meant that the character itself could appear not very credible in the eyes of the audience.

The monodic style and its role in the birth of Opera

The Florentine Camerata, as we have already said, wanted to distance itself from the polyphonic musical style and embrace the kind of vocal music used by the Greeks in their tragedies.

This model of ancient music, created to serve the drama, was believed to be performed using single vocal lines, one for each character, sustained by a fairly simple instrumental accompaniment.

In line with their predecessors, the members of the Camerata started to work on a new style of music that was capable of communicating all the different moods suggested by the lyrics through a simpler and more understandable melodic style.

Giovan Battista Doni labelled it “Monodia accompagnata”, which can be translated as Accompanied Monody.

Galilei’s “Dialogo della Musica Antica e della Moderna” became the solid basis on which the Camerata built the theory of this new form of monody.

As per Galilei, each poetic verse, to be perfectly expressed and understood by the listener, had to be sung using a single melodic line.

The writings of Galileo, coupled with the other works published by the members of the Camerata, such as “The New Music” by Giulio Caccini (1602), made it possible to outline the theoretical characteristics of the New Music:

To make it easier for you to understand this new musical style, I invite you to listen to Giulio Caccini’s madrigal entitled “Amarilli, my beautiful”.

This piece, included in his “New Musics”, is a perfect example of monody:

The choice of this piece is not at all casual, because “Amaryllis, my beautiful” is one of the first examples of accompanied monody ever written and notated on a score.

Unfortunately, I cannot show you any video of this work, because the original score has been lost.

Recitar cantando and the influence on Opera

All the characteristics listed above, inherent to the monody, led to the elaboration of a new style called “recitar cantando”.

It is necessary to point out, though, that the monodic innovations carried out by the Camerata were criticized by Zarlino.

Gioseffo Zarlino, an established music theorist and supporter of the polyphonic musical style, opposed the idea of ​​combining singing and acting, probably because he considered these two artistic realities as two separate worlds.

The first forms of “recitar cantando” were applied to simple monodies and interludes (intermezzi).

An “intermezzo” was a short stage action written to fill the intervals between one act and another in a play.

These interludes often dealt with mythological and pastoral stories and were staged in the palaces of Italian nobles in conjunction with particular events or celebrations.

The members of the Florentine Camerata, perhaps without being fully aware of it, were laying the foundations of the future Opera.

Originally, the first examples of Opera were set up to enhance the patron’s wealth on special occasions related to court life.

The first example of a drama in full “recitar cantando” style is “Dafne“, whose libretto was written by Piero Rinuccini while the music by Jacopo Peri (1958).

“Dafne” is considered by music historians to be the first Opera created by the Camerata.

Unfortunately, we are not in possession of the score.

The other work by Peri and Rinuccini of which, instead, we have the score is “Euridice”, an opera represented on the occasion of the wedding between Maria de ‘Medici and Henry IV of France.

I suggest you listen to the “Prologue” of Euridice, in which both the accompanied monody and the “recitar cantando” style emerge:

It should be noted that, again on the occasion of the wedding celebrations mentioned before, Giulio Caccini created his own version of the Euridice, using the same libretto by Ottavio Rinuccini.

In summary, the creative process born from the Camerata’s experiments meant that polyphony lost its prestige and that the style of the accompanied monody took over.

Starting from the accompanied monody, the Camerata developed a recitative style which was first applied to the interludes and then used in the Opera.

Therefore, all the ideas and experimental pieces of music created by the Florentine Camerata had a great influence on the birth of Opera, because they made it possible for the characters of a story to better express their individual personality and their emotions, combining acting and singing.

In this way, following what were the “rules” of the monody, the audience could now follow the story better, participating with great involvement in the vicissitudes narrated by the actors.