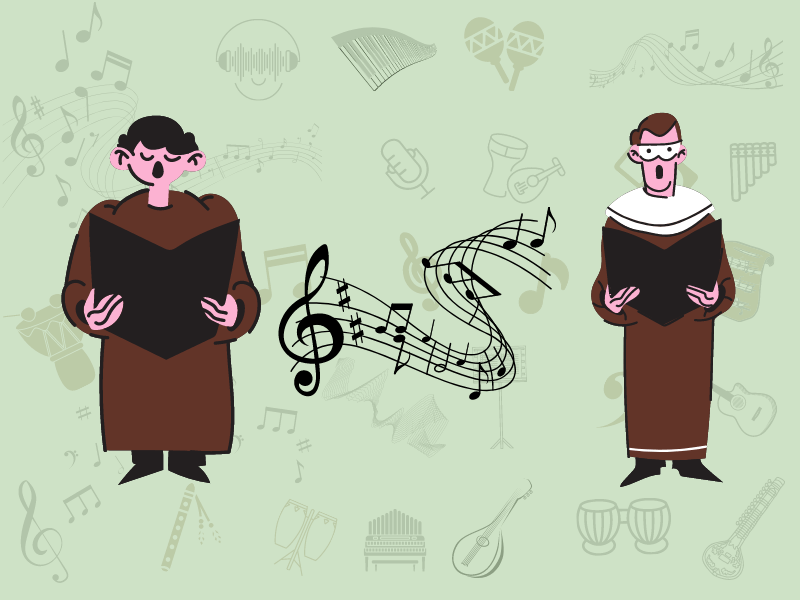 What is a florid organum, also known as melismatic or Aquitanian organum?

Technically, a good definition of florid organum could be this:

a vocal composition in which the upper voice sings a series of rapid melismas (many notes on a single syllable) while the lower voice holds longer notes, primarily double whole notes, acting like a sort of drone.

More specifically, the word organum refers to a polyphonic style of sacred chanting that flourished in Europe from 8th to 13th century and the term melismatic indicates a vocal line in which there are several notes sung on the same syllable (melisma).

That’s why the word melismatic has been quite often replaced with the adjective florid, which is more immediate in conveying that sense of abundance that characterizes the upper vocal part of a melismatic or florid organum.

If you want to deepen the characteristics of melismatic singing and compare it with other prominent styles of chanting developed within the Christian music of the Middle ages, let me suggest you this article: “Difference between syllabic, melismatic and neumatic singing”.

But what’s the rationale behind the choice of the adjective Aquitanian in relation to this specific type of organum?

Well, it has to do with the fact that melismatic organum was cultivated by a series of composers that lived in the twelfth century in Aquitaine, a region in southwestern France.

Geographically, the birth and development of melismatic organum is related to the musical activities that took place in Spain and France (12th century), more precisely, in the liturgical life of Santiago de Compostela, Saint-Martial of Limoges and Notre-dame.

The great innovation introduced by the monks that lived there was essentialy this:

inventing a florid and melodically dynamic vocal line (duplum) and placing it above the pre-existing plain chant (tenor).

Plain chant, whose creation dates back to the 3rd century AD, was a monodic repertoire of chants used in the context of the Medieval Christian worship and later systematized by Pope Gregory (6th century AD), hence the name Gregorian chant.

One of the most important collections of Gregorian chants arranged in the style of melismatic organum is the Magnus Liber Organi (The Great Book of Organum) by Magister Leoninus.

We’re going to analyze one of the compositions included in this collection in the last section of this article.

As you probably already know, the early examples of plain chant did not involve the use of musical instruments, were not organized in discernible rhythms, apart from those suggested by the words themselves, and were sung in unison, which means that no overlapping of diverse and independent melodies was allowed.

Here’s an example of plain chant:

Parallel organum represents the first polyphonic manifestation of Christian music and is based on the co-existence of two vocal parts: an upper voice, called vox principalis, and a lower voice, named vox organalis.

The upper voice chanted the preexisting plain chant, whereas the vox organalis was derived by the vox principalis by lowering each note of the upper melody one fourth or one fifth below.

These two voices moved in parallel and in accordance with the principles of counterpoint, that is, note against note.

Therefore, they were not independent and shared the same rhythm.

Have a listen to this example of parallel organum:

With the advent of melismatic organum a number of changes were made to the vox principalis and vox organalis:

As a result, the vocal exposition of the liturgical texts underwent a process of radical rarefaction and the utterance of each syllable of a given word became an opportunity for fascinating and prolonged vocalizations.

The actual understanding of the words of the prayer passed into second place and a greater level of importance was given to their musical arrangement.

This performance of Cunctipotens Genitor is a perfect example of florid organum:

The best way to understand the musical structure of a florid organum is to analyze and compare the first bars of two compositions written by Leonin and Perotin on the same Gregorian chant.

I’m referring to Viderunt Omnes, a traditional Gregorian chant based on Psalm XCVII and sung at the Masses of Christmas.

Leonin’s version of Viderunt Omnes is an example of the most traditional form of florid organum, called Organum Duplum, which employs two vocal parts: tenor and duplum.

Let’s have a listen:

The lower voice, called Tenor, is treated as a sort of drone and holds the notes for various beats; the upper voice, named Duplum, moves faster and has the task of producing a florid sequence of melismas.

To give you a better sense of how a florid organum works, let’s analyze the musical arrangement of the first word Viderunt, more specifically, the first syllable: “Vi“.

As you can see, the Tenor starts out by chanting an F and holds it for 22 seconds; in the meantime, the Duplum sings a huge melismatic passage consisting of 51 notes.

Perotin, instead of using two voices, decides to expand the polyphonic texture and creates a florid organum for four voices, also known as Organum Quadruplum: tenor, duplum, triplum and quadruplum.

In addition, he organizes the three upper voices in specific rhythmic modes, so as to give a sense of metric cohesion to the newly composed sections of his work.

As you can see from the score, the first bars are clearly built on the following rhythmic mode, resembling a sort of 12/8:

In line with the composition rules prescribed for the melismatic organum, Perotin treats the tenor just like Leonin and assigns it the same function:

holding the notes to create a stable drone upon which the other melodic lines can unfold and interact one another.

In the version of Perotin, the first syllable (vi-) of the opening word ‘Viderunt’ is chanted using a melismatic passage that lasts for 45 seconds.

Here’s how a florid organum (structured as an organum duplum) would look like if written in modern notation: