Music from the Standard of Ur: the lyre player and the singer 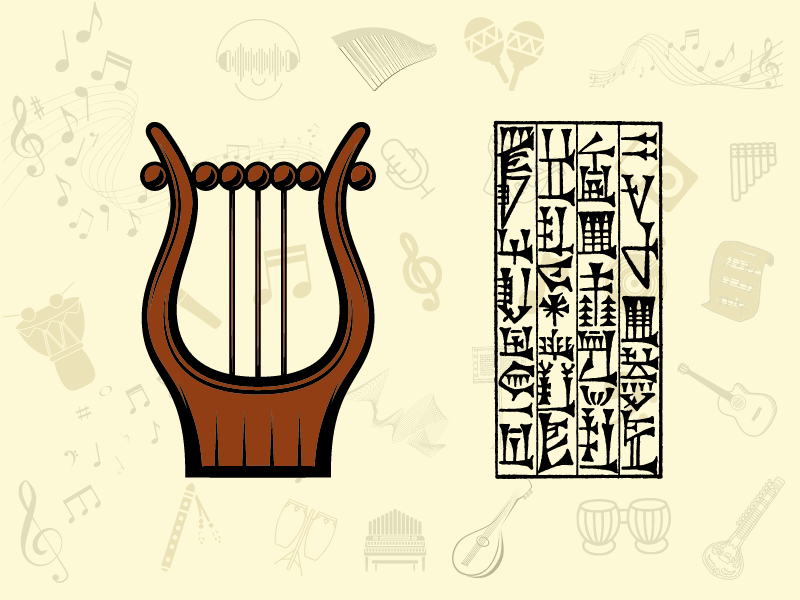 The Standard of Ur: a closer look to the Peace panel

What can we learn about Music in Mesopotamia by taking a closer look at the lyre player and the singer represented in the Standard of Ur?

Before answering this question, we’d better put things into the right historical context.

The Standard of Ur is nearly 4,500 years old and comes from the fascinating city state of Ur, a place located in present day Iraq.

This small but elaborately decorated object (see the picture below) was discovered by the British archaeologist Leonard Wooley during an excavation that brought to light 16 royal tombs and it is now stored within the British Museum:

We are used to call this object “standard” but scholars are not sure about the true nature of it.

Is it really a flag, designed to be brought into battle?

Some historians have also hypothesized that the Standard of Ur could have been a sound box for a musical instrument.

Unfortunately, we don’t know the answer.

What we do know is that the Standard of Ur was intentionally buried by its creator in the context of a sophisticated burial ceremony.

This wonderful object has two sides, or panels: the “War” panel and the “Peace” panel.

Each section of the “Peace” panel tells us much about the hierarchical organization of the Mesopotamian society.

Here we can see the representation of a scene of prosperity and peace, articulated in different levels or sections.

If you take a look at its narrative structure, you will notice that it is divided into three sections:

• common laborers are placed at the bottom and are depicted while bringing goods on their backs and shoulders, presumably to the king
• farmers, breeders and  and shepherds are found in the middle section, leading several animals to a certain destination (a sacrifice? an offering to the king?)
• the king and his functionaries are at the top, intent to celebrate a victory or perform a religious function, accompanied by the melodies produced by a lyre player and a singer

If you want to know more about the history of the Standard of Ur, I’m sure this video can be of help:

The lyre player and the singer in the Standard of Ur

One of the most extraordinary things that the Standard of Ur can do for us is shedding some light on the role of vocal and instrumental music in ancient Mesopotamia.

Let’s start off with identifying the exact position of the lyre player and the singer in the Standard of Ur.

The two musicians appear only on one side of the standard, called “the Peace panel”.

Here we can see the representation of a scene of prosperity and peace, articulated in three different levels or sections.

The lyre player and the singer are found in the upper level, on the far right of the “peace panel”, and share the same environment of the king and his attendees.

The size of the two musicians is smaller though.

This difference in dimensions remarks the hierarchical inferiority of the artists compared to the king.

While the lyre player is bald and quite similar to the other secondary figures, the singer’s appearance is radically different from all the other people represented in the Standard of Ur: his hair is long and black.

The clasped hands serve the purpose to press the diaphragm so as to facilitate the vocal emission and, as a result, the power of the performance as a whole.

The lyre represented in the Standard of Ur is a box lyre.

As you can see from the posture of the musician, it is played in an upright position and both hands are employed to pluck the 10 strings.

By examining the Peace panel we can learn that lyres were used in accompaniment to songs played in the context of royal banquets and religious ceremonies.

In addition to that, it also proves that the extreme abundance of food allowed this civilization to promote music and the arts in general, since not all the people had to focus on working in the fields.

Why was the lyre decorated with a bull?

When you look at the lyre player depicted in the Standard of Ur you’ll notice that his musical instrument is decorated with a bull’s head.

Research has shown that the bull played a key role in the religious imaginary of the Sumerians: it could serve as the deity’s divine animal or the god himself could take on the form of a bull.

Seeing lyres with a bull’s head attached to the front was not uncommon in ancient Mesopotamia.

In fact, the archaeologists working in the Royal Cemetery at Ur between 1922 and 1934 found eight lyres with bovine heads placed in their sound boxes.

It has been hypothesized that the bull was associated with a particular type of lyres, those that had a deep tone.

This association might derive from the fact that bulls and bovine species as a whole produce low tones as well.

In this video by Luc Vanlaere you can get a sense of how the lyre of the Standard of Ur might have sounded:

Kilmer, Anne Draffkorn (1971). “The Discovery of an Ancient Mesopotamian Theory of Music“. Proceedings of the American Philosophical Society. 115: 131–49

Francis W. Galpin, The Music of the Sumerians: And Their Immediate Successors, the Babylonians and Assyrians. Cambridge University Press, 1937