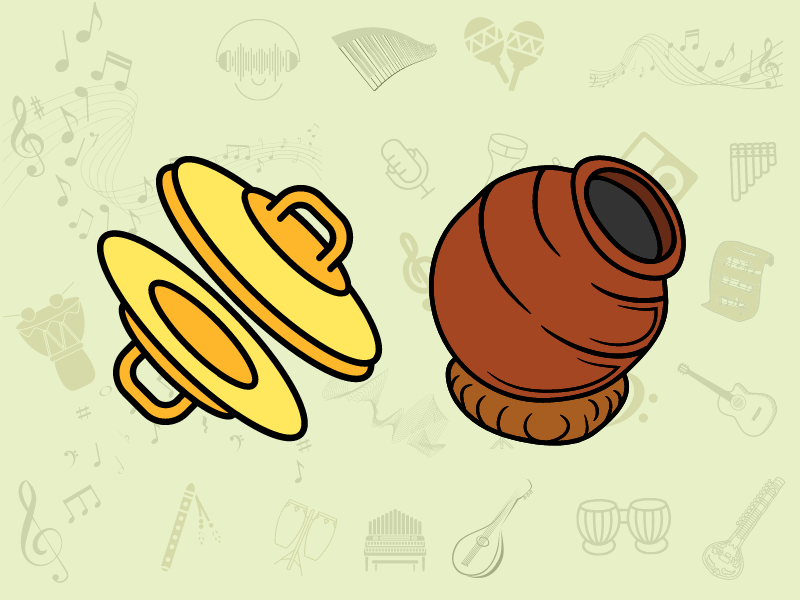 What is Ghana Vadya?

Similarly to what we find in the Hornbostel – Sachs classification of musical instruments, an ancient Indian treatise called Natya Shastra defined as Ghana Vadya all those musical instruments that produce sound by being put under vibration without plucking a string or striking a membrane.

In other words, Ghana Vadya instruments are what we usually call idiophones, and, as such, the vast majority of them can’t emit sounds with definite pitches, which means that they are used primarily to play secondary rhythmic patterns within larger ensembles.

They are made of ceramic, wood, metal or glass and the sounds they are capable of generating tend to be of short duration and are generally produced by means of concussion, that is, by striking together two objects capable of vibration.

What makes Ghana vadya unique is the fact that they can be played without any kind of tuning.

In addition to that, the sound gets produced by striking the parts of the instrument one against the other without having to resort to strings, stretched skins or air blown.

As simple as they may seem, professional musicians have to learn how to handle them carefully, because idiophones are, by their very nature, very noisy and can obstruct the main melody if are not played in accordance with specific techniques and are not held in hand following a precise set of rules and prescribed postures.

Ghana Vadya instruments are used in India primarily as time keepers but sometimes they can play the part of soloists or help dancers emphasize specific rhythmic passages.

Some examples of Ghana Vadya

In this section I’m going to give you some examples of Ghana Vadya together with a series of listening suggestions.

Considering the immense size of the Indian subcontinent and the high number of its regional musical traditions, I’ve decided to list only the most common idiophone instruments, which means that some local variants and types of ghana vadya will be necessarily excluded.

The musical instruments I’ve chosen are the following:

Each instrument contained in the list will be described only briefly since the purpose of this article is to give you a quick summary of the main Indian Ghana Vadya that can help you get oriented and move your first steps into the intricate world of Indian musical instrument classification.

Before diving into the six examples of ghana vadya I’ve selected for you and discovering how each of them actually sounds, it is important to stress that today these instruments are used in a wide geographic area comprising India, Tibet, Pakistan and other regions in South-East Asia.

Let’s start by talking about Manjira, also known as Taal.

It is a pair of small hand cymbals that you can find played very often during Hindu devotional music sessions.

Manjira is a classical example of Ghana Vadya and is made of brass or bronze.

Another example of Ghana Vadya is Khartal, a wooden clapper formed by two discs or plates.

Khartal literally means “rhythm of the hands” and is mainly used in devotional and folk songs.

The name of this ancient idiophone instrument comes from two Sanskrit words:

“kara” which means hand and “tala” which can be translated as rhythmic cycle, clapping or time.

The way in which Khartal is played in this video is mind blowing: two “simple”pieces of wood have the capacity to build a complex net of strokes and patterns that gets more and more sophisticated when the Khartal player begins to dialogue with the other drummer playing the Dholak.

Chimta is an idiophone instrument that can be played both in rural musical performances and in large scale events such as concerts and TV shows.

Its shape reminds a pair of tongs decorated with small brass jingles.

One of the undisputed masters of chimta is undoubtedly Arif Lohar, an eclectic singer and musician which is used to accompany his vocal performance by playing this peculiar kind of Ghana Vadya.

This video can be helpful to clarify the rhythmic role of chimta in Arif Lohar’s passionate and overwhelming live shows:

Morchang, also known as Morsing, is an example of plucked Ghana Vadya.

This small but highly fascinating idiophone consists of a tongue that produces sound when it gets plucked by a performer.

It is a used as a secondary rhythmic instrument both in Hindustani and Carnatic classical music traditions.

Sometimes it can also play the role of soloist within folk music ensembles.

The rhythmic patterns and timbric variations that a skillful morchang player is able to generate are as surprising as engaging.

Have a listen to this solo by Gafur Khan:

Jaltarang can be considered as belonging to the Ghana Vadya family because it is a directly struck idiophone made of a varying set of porcelain bowls that get hit by using a thin bamboo stick.

These bowls can vary in size, number and are all filled up with water.

Depending on the quantity of water, each porcelain bowl produces a given pitch.

As a result, what makes Jaltarang worthy of our attention is the fact that it produces definite pitch sounds and can be used to play raga-s (Indian traditional modes) and melodies.

Instruments like Jaltarang prove that certain types of Ghana Vadya can be tuned actually, in contrast with the general definition provided in the opening section of this article.

This documentary on Milind Tulankar will help you better understand the melodic possibilities offered by Jaltarang:

The last example of Ghana Vadya I want to introduce to you is Ghatam, a narrow-mouthed earthenware water pot that has been deprived of its original function to progressively become a percussion instrument.

Ghatam falls into the category of percussion Ghana Vadya.

It is an idiophone in which sound gets created by hitting the ceramic pot with the performer’s bare hands.

Let’s have a listen to the marvelous sounds that can be derived from Ghatam through the mastery of Padma Bhushan Vikku Vinayakram: