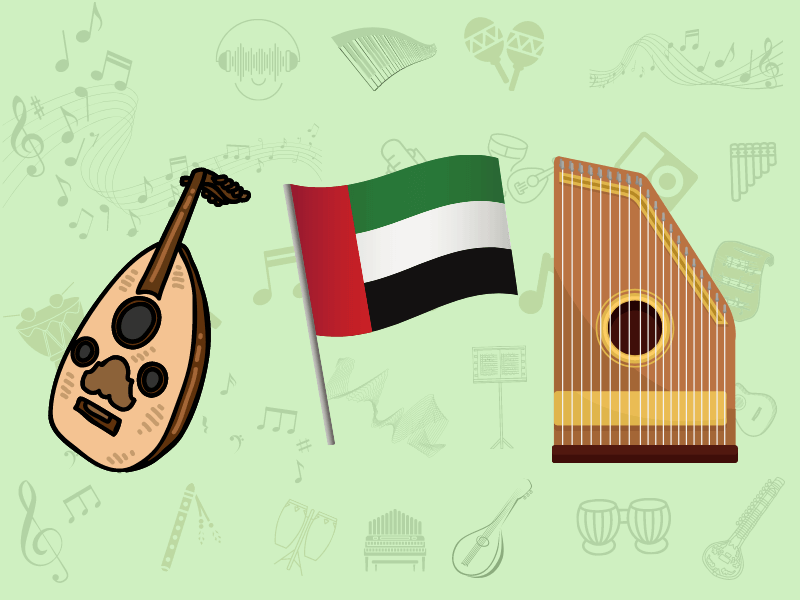 Bait Al Oud literally means “the House of Oud” in Arabic and refers to a prestigious music school located in Abu Dhabi, the capital of the United Arab Emirates.

As you will see later on, we’re going to be dealing with a pretty unique learning centre, something that is far more than yet another music school designed to create experts in the field of Arab traditional music.

But let’s proceed in order.

Bait Al Oud Abu Dhabi was born in 2008 and is the product of the joint effort of a visionary Iraqi oud master, Naseer Shamma, and Abu Dhabi Tourism & Culture Authority.

Their goal was clear and ambitious:

founding a centre that could contribute to the promotion of Arab traditional music among the Emirati nationals and the other communities living in Abu Dhabi.

In addition to the centre located in Abu Dhabi, Naseer Shamma has founded other sections of Bait Al Oud in Algiers, Cairo, Baghdad and Khartoum so as to embrace, with the same project, different areas of the Arab world.

Much more than a music school

What is unique about this music school located in Abu Dhabi is definitely its multifaceted nature.

Bait Al Oud Abu Dhabi is a community centre that brings together different elements and aspects of Arab music: its most representative musical instruments, the scientific knowledge and technical expertise that lie behind their construction and the invaluable talent of a group of passionate music teachers, accurately selected and supervised by the far-sighted vision of Naseer Shamma.

In this article I’m going to give you an overview of all the main activities that take place within Bait al Oud, so that you can get a better sense of the importance of this centre in the socio-cultural life of Abu Dhabi.

One of the most intriguing things about Bait Al Oud is that you can find a room hosting a small, but highly significant, collection of musical instruments connected to the Arab world.

There is even a replica of the mythical bull-headed lyre of Ur, a Sumerian instrument represented in the famous Standard of Ur.

However, it is the oud to be the undisputed star of this wonderful collection.

In fact, you can see one of Mohammad Fadhil’s ouds, an object dating back to 1977 and created by one of the most renown Arab contemporary luthiers.

Then you can find another beautiful oud, produced by Azza al Qubaisi, a pretty bizzarre specimen I must say, since it was made using the letters contained in Naseer Shamma’s name.

Worthy of being mentioned is the rich collection of stringed instruments belonging to the oud family, such as the Algerian bandul and the Bass oud.

They are presented in a range of different sizes.

The vast majority of these ouds have been designed and built by the talented artisans working at Bait Al Oud.

The oud production at Bait Al Oud is managed and supervised by Amr Fawzi, an Egyptian musician, sculptor and oud maker that has had the privilege to learn how to play the oud under the guidance of Naseer Shamma.

All the materials required to craft an oud are carefully kept in the wood storage room.

It is here that the wood is aged.

Selecting the right type of wood is key to produce an instrument capable of both looking good and helping the player produce high quality sounds.

As Naseer Shamma reminds us, when you make an oud the main focus is on the way in which the instrument will sound rather than its external appearance or decorations.

It is with this precise philosophy that ouds are made at Bait Al Oud Abu Dhabi:

helping musicians’ fingers get the most out of the instruments.

To achieve this goal, Amr Fawzi and his team have to follow a precise set of academic principles, measurements and scientific guidelines.

The final assembly of all the constituent parts of the ouds is made in another room, that is always open to visitors, so as to allow them to better understand the highly complex process of making an oud.

All the accessories required for building the musical instruments are created in this workshop, which has become the unquestionable point of reference for those who want to purchase a top level instrument in Abu Dhabi.

When we pause to analyze the internal structure of a music school, the first thing that gets examined is usually the nature of its curriculum.

Each of these departments is directed by a renown musician coming from Egypt, Syria, Iraq and the UAE.

The entire curriculum has been created and gets regularly supervised by the founder himself, Naseer Shamma, during his regular visits to Abu Dhabi.

If someone wants to become a student, he or she must undergo a trial period first.

There are no age restrictions but it is highly recommended to start studying at a very young age.

Students are constantly monitored by their teachers and have to show regular commitment if they want to get to the final stage and earn the diploma.

The school year is split into two semesters and includes around 6 hours of training per week, during which the students alternate the musical practice with the study of solfege and music theory.

The curriculum is specifically designed to form musicians capable of playing both as soloists and in ensemble.

Those who attend Bait Al Oud are encouraged to express their own creativity and personality through the language of Arab traditional music, looking for new ways of balancing tradition and modernity.

Some of them have become music composers and not only good interpreters.

You can find more detailed information about the courses, the teachers and the enrollment process by visting Bait al Oud’s official page.

Obviously, the first goal of the teachers working for Bait Al Oud is to strengthen Arab music identity and preserve the knowledge revolving around the oud.

But if you dig a little bit deeper into the mission of the centre, you’ll find out a lot more than you think.

In line with the vision of Naseer Shamma, music is to be perceived by students as a form of energy, a force capable of restoring peace in our mind and change it from within.

Music rises above all the differences in religion, colour and language and makes us all feel like brothers.

Coming to Bait al Oud to learn how to play oud, qanun and Arab traditional music in general is an opportunity for students to start working on their own identity and re-thinking its relationship to their cultural roots.

Music requires morality, otherwise its power will get lost.

A good musician is one who fuels the spark of creativity by taking care of the spirit, the heart and the mind. All of these human faculties are to be aligned with musical creativity in order to have a well-rounded and truly inspiring performer.

Once you know your own culture very well and your musical identity gets firmly established, then you can open yourself to the world of sounds around you and deal with musical otherness without fear.

That’s why Naseer Shamma invites his students to consider music making not as an ordinary profession but rather as “a beautiful space, inside which a person can move, a unique tool allowing people’s souls to connect one another”.

One of the things I love the most about Bait Al Oud Abu Dhabi is that it has been organizing concerts and musical events since its foudation.

These shows are usually put on in its premises and are called “Visits from Bait Al Oud”.

As far as I know, seven of these “Visits” have been organized to date and two of them are currently available on the official Youtube Channel of Abu Dhabi Culture.

The latest one in particular struck me a lot because of its ambitious goal: presenting a fusion of Hispanic and Arabic music.

Several classics from Latina America have been rearranged for the occasion, to fit the characteristics of the instruments taught at Bait al Oud, such as the oud and qanun.

Here’s the video of the performance:

By listening to the video you can easily realize how two of the main traditional instruments representing the Arab music worldwide can wonderfully adapt to other genres and magically become a modern symbol of cross-cultural dialogue.

There is an underlying message of brotherhood in the work done at Bait Al Oud that makes this school an actual community centre.

The policy of organizing musical events inside Bait al Oud has been kept alive even during the pandemic, with a series of online events supervised by Nasser Shamma.

The purpose of these online musical shows was, as explained by Naseer Shamma, the following:

“sharing a message of hope and prayer for all the people that have lost their lives due to coronavirus worldwide”.

In the context of these online performances, many graduate musicians from Bait Al Oud Abu Dhabi have got a chance to get involved and showcase their musical talent, as you can see in this video, uploaded on Youtube by Abu Dhabi Culture:

Behind Abu Dhabi Tourism Department’s decision of inviting Naseer Shamma to open another branch of Bait Al Oud in the UAE, lies a specific cultural policy that I think it is worth explaining.

On the one hand, the Emirate of Abu Dhabi wanted to create a centre where nationals and residents could discover and learn more about Arab traditional music; on the other hand, by assigning the artistic direction of the centre to Naseer Shamma, the local cultural authorities aimed to establish an intercultural dialogue between Arab music and other musical styles.

In addition to that, the mission of graduating professional musicians specialized in Arabic music will help Abu Dhabi’s entertainment industry organize high quality concerts and music festivals for the local citizenship.

According to Nasser Shamma, the musicians that graduate from Bait Al Oud will be able, on the one hand, to master the traditional techniques and repertories specific to Arab music, on the other hand, they will always be ready and happy to make Arab music dialogue with other styles and genres coming from different parts of the world.

Finally, we must not forget that Bait al Oud offers guided tours as well and, as a result, can be considered as a tourist destination.

Those travellers that decide to come and visit the centre are guided through a highly diversified experience, ranging from seeing the numerous types of oud hosted in the local museum to attending a short concert, while observing how the oud making process actually works.

The socio-cultural role of Bait al Oud is increasing in importance these days, considering the launch of the UAE national programme for tolerance (2018) and the latest goal of the government to empower the sector of creative economy.

It has now become a community centre, a place where Emirati and expatriate families gather together, either to attend a musical event, support their own children during the daily classes or take part in the long-awaited graduation concert.

I think that this spirit of multi-ethnic cooperation perfectly resonates with Naseer Shamma’s goal of “planting an educated musician in each Arab household to banish extremism and ignorance” since music, he believes, has the power of dissolving all the aggressive aspects that dwell in our minds.

Before ending, I’d like to share with you a final thought about Bait Al Oud Abu Dhabi.

As I was watching the Youtube video posted below, in which Naseer Shamma showed around the centre to a journalist, I was impressed by hearing a young man playing Debussy’s “Claire de Lune” on the qanun (min 7:28).

It was like attending the magical fusion of two musical civilizations, a sort of sonic embrace, a cross-cultural synthesis that embodies, in my opinion, the core of Nasser Shamma’s vision of music and highlights one of the main reasons why Abu Dhabi’s cultural authorities have decided to support and transplant his project in the UAE.