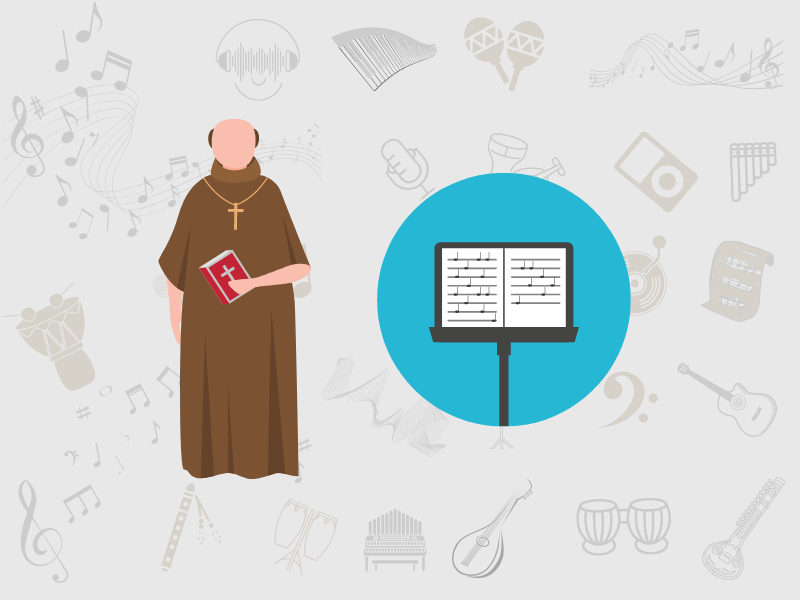 Before talking about the typology and function of clefs in Gregorian chant, I think it may be useful to provide a concise definition of the term clef.

What do we mean by clef?

In music, a clef is nothing but a key to notate, interpret and perform correctly the musical intervals that form a melody.

You probably already knew that but I thought it was worth mentioning.

What’s interesting is that clefs in Gregorian chant have a more flexible nature than those currently used in the context of Western music.

Let’s take the treble clef and the bass clef, two of the most popular and used keys used in contemporary Western music.

These two clefs serve two main purposes: indicating the relationships between half and whole notes on the staff and associating the symbols of the notes to a specific set of frequencies.

Both could be placed on different lines of the Gregorian 4-line staff, in contrast to what I’ve just said about the treble and the bass clef, which are fixed.

Another difference between the two systems of clefs, the Gregorian and the modern one, is this:

both the C and the F clef were meant to notate the intervals of a given melody but were not intended to be used as a means to point to an absolute value or frequency.

This means that a Gregorian chant could be transposed into any vocal range as long as the intervals written on the score stayed the same.

Let me also emphasize that clefs could be moved in the middle of a chant, so that all notes fit on the staff.

C clef or Do clef

Let’s take a look at this musical score representing a syllabic melody: 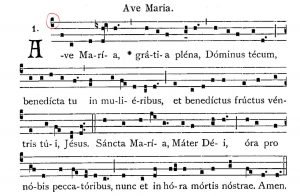 The C clef is that symbol, marked in red, at the top left of the score.

If you analyze the shape of this clef, it actually resembles the form of the letter C.

As you can see, it is placed on the fourth line of the 4-line staff, called tetragram, which was traditionally used by Medieval monks to notate Gregorian chant.

It is important to remember that the C clef could be put in any of the four lines of the staff.

Having the C clef positioned on the fourth line means that the note C is found there and that the other notes can be identified accordingly:

Here you can see the transposition of the first two bars of the above mentioned Gregorian melody from a four-line to a five-line staff:

Keep in mind that the choice of the frequency to assign to the note C is arbitrary, since the clefs in Gregorian chant helped the singer to identify the intervals of a given melody and not the specific frequencies.

If you listen to this version of Ave Maria, you’ll notice that the performers do not start the chant singing the frequency corresponding to the note F indicated on the staff but prefer to transpose the melody one tone higher:

Let me now turn to the F clef and how it was depicted in the Gregorian chant. 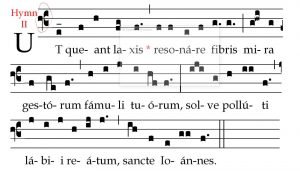 The F clef is that symbol, circled in red, written on the top left of the four-line staff.

From a graphical point of view, this key is formed by combining the C clef with a square note.

In the example I’ve chosen, the F clef is placed on the third line of the staff and, as you would expect, it indicates the position of the note F.

There are examples of Gregorian chants that have been notated using a F clef placed on the fourth line.

However, the vast majority of Gregorian musical scores prefer to put the F clef on the third line.

Once you know that the third line corresponds to a F, it’s very easy to determine the other notes and, as a result, the reciprocal disposition of the intervals related to this piece of Gregorian chant:

Moving upwards, G is placed on the third space and A on the fourth line.

This is the transposition of the first two bars of the melody from the Gregorian notation to our own:

As I said before, if you want to sing this Gregorian chant following the original notation you are free to start the piece in any pitch you like, since the clefs in Gregorian chant serve the purpose of indicating the relationships between half and whole notes, which means they do not point to an absolute frequency.

In fact, the person who performs this version of Ut queant laxis does not begin the chant using the note C, as indicated on the staff, but opts for the note D.