How can I tell the difference between C major and A minor in terms of chords and scales?

What do music theorists mean when they say there is a relationship between C major and A minor?

If you love music and are interested in understanding its building blocks, then it’s important for you to find an answer to these questions.

Before we dive into the analysis of the main differences between C major and A minor, I think it’s useful to step back and do a brief recap of how these two chords are made, their intervals and relative scales.

The C major chord is created by playing these three notes simultaneously: A minor chord: notes and intervals

The A minor chord, for its part, is obtained by playing another set of three notes: 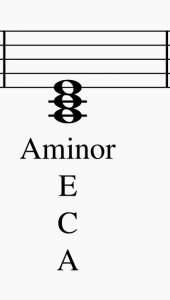 Difference between C major chord and A minor chord

Speaking of chords, the difference between C major and A minor lies in the typology of notes combined and their mutual disposition in terms of intervals.

As you may have noticed, the chords of C major and A minor differ from each other for one note: C major presents the note G which is absent in A minor and the chord of A minor contains the note A which is not part of C major.

However, this criterion of differentiation based on the order of the intervals deserves a clarification.

If we keep in mind that a given chord can be presented using either its root position or its inversions, you can find yourself in a situation like this: 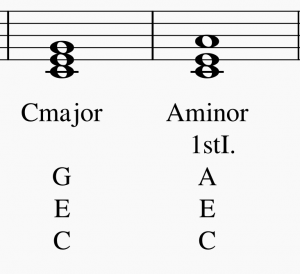 As you can see, comparing the two chords, the first two notes and intervals are identical: two C-s and two major thirds ( C – E).

The difference between the two arises when you analyze the other two intervals:

The chord of C major presents a minor third, as you would expect, whereas the chord of A minor showcases a perfect fourth as a result of the fact that is written in its first inversion.

If you want to play the C major scale you have to perform the following sequence of notes:

When you organize the notes in this way, you create an ordered set of whole steps and half steps:

When it comes to playing the A minor scale you have to perform a different sequence of notes:

As a result, you create a specific set of whole steps and half steps:

Difference between C major scale and A minor scale

The first difference between the scale of C major and the A minor scale is pretty obvious and lies in the starting and ending notes.

In fact, when you play C major, you start with C and end with C; on the other hand, performing the scale of A minor means, needless to say, that you start playing the note A and conclude the sequence once you reach the note A positioned one octave above.

A more subtle distinction between the two scales can be found in the internal disposition of whole and half steps.

As explained in the previous section of this article, there are two half-step intervals both in the C major scale and the A minor scale.

Relationship between C major and A minor: the concept of relative keys

Having said that, let me invite you to take a look again at the two scales.

Analyze the notes included in the scale of C major and then compare them with those forming the A minor scale.

What do you see?

both scales are built using the exact same set of pitches.

The notes are identical but they are disposed in a different order.

Difference in mood and symbolic meanings

There is also another aspect that differentiates the C major scale from the scale of A minor.

I’m referring to the symbolic and emotional meaning that the Western musical tradition has assigned them over the centuries.

Even though they have the same notes inside, they evoke different emotions in a westerner listener:

The C major scale has often been associated to positive and luminous moods, situations and values, while the scale of A minor tends to be linked with darker and melancholic aspects of reality.

This dichotomy also applies to the chords of C major and A minor respectively.

There are numerous pop-rock songs and classical pieces written in C major as well as in A minor.

When you hear or read that a given composition is written in C major this means that the chord of C major is the main tonality of the piece, its center, around which all the other chords revolve.

On the other hand, the pieces of music written in A minor, such as Schumann’s Piano Concerto Op. 54, Led Zeppelin’s Stairway to Heaven and R.E.M.’s Losing my Religion, just to mention a few, have the A minor chord as their main center of gravity, the final destination where all the melodies and chords tend to return and rest.